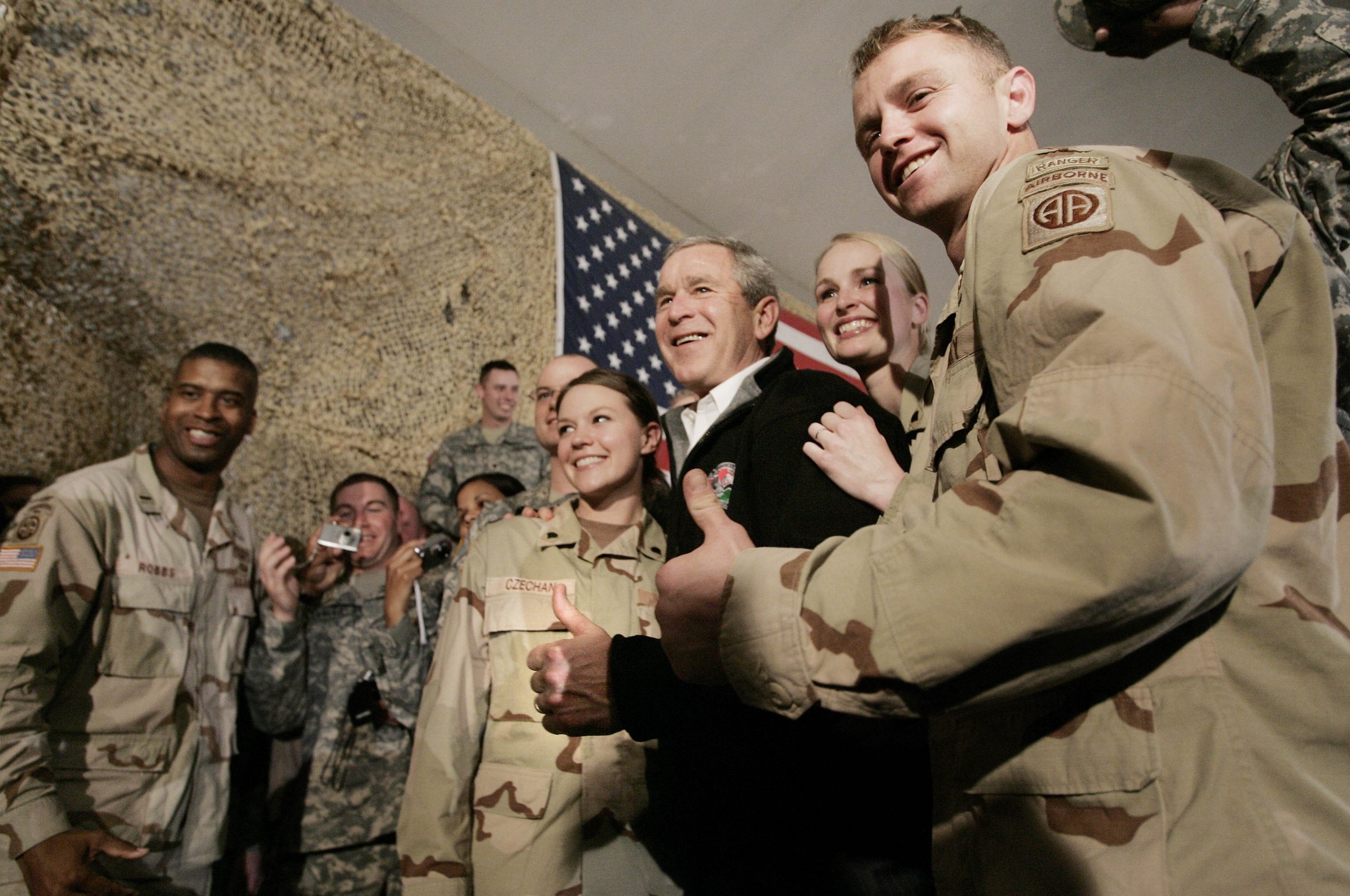 Link : The U.S. squandered the world’s sympathy by invading Afghanistan and Iraq. What will it learn from defeat?, The Washington Post

Fawaz A. Gerges is a professor of international relations at the London School of Economics. He is the author of several books, including “ISIS: A History.”

As the U.S. abruptly ends its war in Afghanistan, the Taliban has returned with a vengeance. Many Afghanis feel betrayed. America promised security and freedom, but the U.S. and its allies have abandoned the people of Afghanistan, leaving them at the mercy of the brutal and repressive movement.

This was not predestined and could have been avoided.

As we approach the 20th anniversary of 9/11 attacks, it is worth asking what if America had acted radically and imaginatively eschewing imperial overreach? What if instead of launching a War on Terror, the greatest strategic disaster in America’s modern history, U.S. leaders had used 9/11 as a catalyst to bring about a more tolerant, peaceful and prosperous world, the anti-thesis of Al Qaeda’s worldview?

This was neither a farfetched scenario nor it is wishful thinking.

Before the dust settled on the crime scenes at the U.S. homeland, there was an outpouring of sympathy and solidarity with Americans worldwide, including the Arab and Muslim world. The international community rallied behind America.

On September 13, 2001, an editorial on the front-page of the French newspaper Le Monde echoed a sentiment widespread in Europe, and beyond, that day: “We are all Americans.”

Even in Iran, which had suffered under an American-led economic siege for nearly two decades, leaders sent condolences to their American counterparts, the first direct official contact between the two countries since the 1979 Islamic Revolution.

Instead of building on this goodwill and solidarity, however, the United Stated embarked on a two-decade, all-out war against enemies both real and imagined. In doing so, it squandered a historic opportunity to work together with other nations to undo the harm of its Cold War policies, which contributed to the emergence of Al Qaeda.

What if the U.S. had targeted only Al Qaeda, rather than invading Afghanistan and Iraq, by building a genuine international coalition that included Arabs and Muslims? If the U.S. had done so, it could have denied the jihadists the social oxygen or popular support that had given them a new lease on life after 9/11.

In a 1999 memo to his lieutenants in Yemen, unearthed subsequently by the U.S. army and cited in my book “The Far Enemy,” the head of Al Qaeda, Ayman al-Zawahiri, tried to convince the group that attacking the United States was the only way to resuscitate a dying jihadist movement (in the late 1990s, the jihadists were on the brink of defeat in Egypt, Algeria, and elsewhere).

Zawahiri wrote that if the American homeland were attacked, the U.S. would lash out angrily not just against the jihadists, but also Muslim nations. This would allow the jihadists to portray themselves as defenders of the ummah, or the Muslim community, and gain more followers.

Zawahiri’s strategy worked. At the height of its prowess in 2001, Al Qaeda’s membership did not exceed 1000-2000 combatants. Twenty years into the War on Terror, there are approximately between 100,000 and 230,000 active jihadi combatants in dozens of countries worldwide.

The War on Terror has fueled the very groups it was designed to destroy.

In the wake of the mass atrocity of 9/11, it is understandable that priority would be retribution, but by being somewhat keener and more far-sighted, America’s leaders could have not only avenged the victims and brought Al Qaeda to justice, but they could have also radically changed the nature of its relations with the Arab and Muslim world.

America’s leaders could have recognized the costs of continuously propping up dictators and made a strategic commitment to democracy promotion, not through the barrel of a gun and social engineering as the neoconservatives did, but by partnering with local civil society and the international community.

America could have used its power to help resolve regional conflicts and civil strife, rebuild institutions, and invest in education and jobs, building blocks of democracy.

The War on Terror was a war of choice, not necessity, and it has been costly in blood and treasure.

While we cannot turn back the clock, as we approach the 20th anniversary of 9/11, part of America’s national conversation should be to reflect on what went wrong. There is a need to hold the “terrorism industry” that emerged in the wake of the attacks accountable for peddling fear and distorting reality.

As the most powerful nation in the world, the U.S. must resist the temptation to shoot first and ask questions later. This has been a recipe for disaster in Vietnam, Iraq, Afghanistan and beyond. American leaders must rid themselves of a crusading impulse and a moral superiority complex in international affairs that has done more harm than good to the nation. Instead, they should recognize the limits of hard power and show humility, prudence and respect for other cultures.

Tragically, the idea of American exceptionalism has been weaponized, thus turning the United States into an empire by default. Iraq and Afghanistan are just the latest examples of this hubris.

Instead of trying to make other countries in America’s own image, the U.S., together with the international community, should invest in rebuilding failed institutions abroad, eradicating abject poverty and combating extremism. American leaders must also bridge the divide between their rosy rhetoric about human rights and democracy and their actions, which are seen as cynical and self-serving in many parts of the world.

President Biden and his team insist than U.S. foreign policy should reflect the interests and concerns of the middle class. But there is a more urgent task which to democratize American foreign policy and make it more inclusive, as opposed to being dominated by a narrow and a homogenous elite, which, time and again, has entangled the nation in military ventures in distant lands.

We owe this to the nearly 3,000 Americans who were killed on 9/11, and we owe this to the many American soldiers, Iraqi and Afghan civilians, who died in wars that should not have been fought.

Fawaz A. Gerges is a professor of international relations at the London School of Economics. He is the author of several books, including “ISIS: A History.”

Fawaz A. Gerges is Professor of International Relations at the London School of Economics and political Science – LSE, and holder of the Emirates Professorship in Contemporary Middle East Studies. He was also the inaugural Director of the LSE Middle East Centre from 2010 until 2013. Professor Fawaz A. Gerges’ most recent books include Contentious Politics in the Middle East: Popular Resistance and Marginalised Activism beyond the Arab Uprisings (Palgrave Macmillan, September 2015); The New Middle East: Protest and Revolution in the Arab World (Cambridge University Press, January 2014) and Obama and the Middle East: The End of America’s Moment? (Palgrave Macmillan, September 2013). On the ten-year anniversary of 9/11 , Oxford University Press released Professor Fawaz A. Gerges’ book, The Rise and Fall of Al Qaeda. Gerges’ New Book: Making the Arab World: Nasser, Qutb and the Clash That Shaped the Middle East (Princeton University Press, March 2018). Gerges’ Upcoming Book: The Hundred-Year-War for Control of the Middle East, 1918-2018 (Princeton University Press, 2019).
PrevNext
We use cookies on our website to give you the most relevant experience by remembering your preferences and repeat visits. By clicking “Accept”, you consent to the use of ALL the cookies.
Cookie settingsACCEPT
Manage consent