Every year, the participants come from 5 continents in more than 40 countries…

The programme’s second strength is the profile and variety of its participants. Brussels, being the home of many international institutions, including the E U & NATO, a significant proportion of participants are diplomats or international civil servants. Many others are corporate executives, journalists or NGO staff members. The group of participants has been consistently international, drawing people from all continents, and from practically all European countries. Top professionals of some 40 different nationalities attend CERIS Executive Masters. The average age of those attending courses lies at around 32. Two thirds of them are aged between 25 and 34, but more than a quarter are over the age of 35. Most have backgrounds in political science, economics, business administration, law or modern languages.

This diversity greatly enriches the programme, allowing for an exchange of views with people often directly involved in the issues. Interaction within the group is an important part of the programme, to which each participant can contribute with his or her specific expertise. Students are expected to take part actively in the programme. Socialising is an equally important part of the programme: in addition to the classes and seminars, participants have regularly organised a number of informal gatherings and extra-curricular activities, including study trips or visits to international organisations in Europe. 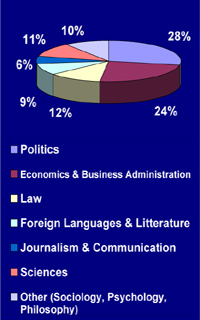 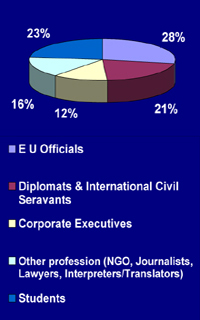