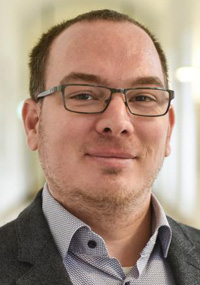 Mr. Krisztián Manzinger graduated from the Faculty of Law of the University of Szeged, Hungary in 2005, but he also studied at the Faculty of Law of the West University of Timişoara, Romania, during the academic year of 2007/2008. Between 2008 and 2019, he served as a Hungarian diplomat, working in Budapest at the National Assembly and the Ministry of Foreign Affairs, and in missions in Bucharest, Romania at the Embassy of Hungary, and in Brussels, Belgium at the Permanent Representation of Hungary to the EU.

In 2018, he defended his Ph.D. titled ‘Territory-based Power-sharing as a Pre-requisite of Democratic Stability of Multicultural European States’, in Hungarian, at the Károli Gáspár University of the Reformed Church in Hungary, Budapest. His academic focus has been minority policies, state stability in vulnerable societies, and nation building. Since 2019, he has been a senior lecturer at the Faculty of Law of the Károli Gáspár University teaching international law and minority policy focusing on Hungary and other Central European states. Currently, he is also a postdoc at the National University of Public Service in Budapest, Hungary.