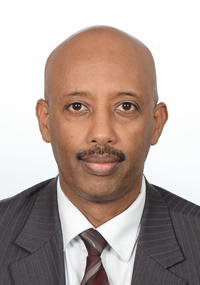 Mr. Tsegab Kebebew Daka is an Ethiopian career diplomat. Ever since he entered the foreign service in 1994, he has served in various capacities in the Ministry of Foreign Affairs of Ethiopia, including in Ethiopia’s embassies in Beijing, the Hague and Washington DC. Prior to his recent posting as Deputy Chief of Mission in the Ethiopian Embassy in the Hague, Netherlands, he was the Director General for Asia and Pacific Directorate of the Ministry. He has also been the Coordinator for United Nations Security Council Affairs, leading the campaign for Ethiopia’s successful bid to join the Council for the 2017-18 term. Tsegab Kebebew Daka holds an MA in political science from Jawaharlal Nehru University, India and an Executive Master in Governance & Development Policy from CERIS-ULB Diplomatic School of Brussels.