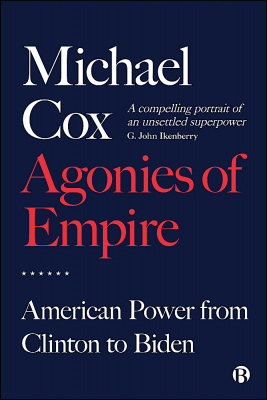 The defeat of Donald Trump in November 2020 followed by the attack on the US Congress on 6th January 2021 represented a tipping point moment in the history of the American republic. Divided at home and facing a world sceptical of American claims to be the ‘indispensable nation’ in world politics, it is clear that the next few years will be decisive ones for the United States. But how did the US, which was riding high only 30 years ago, arrive at this critical point? And will it lead to the fall of what many would claim has been one of the most successful empires of modern times?

In this volume, Michael Cox, a leading scholar of American foreign policy, outlines the ways in which five very different American Presidents – Clinton, Bush, Obama, Trump and now Biden – have addressed the complex legacies left them by their predecessors while dealing with the longer-term problems of running an empire under increasing stress. In so doing, he sets out a framework for thinking critically about US foreign policy since the end of the Cold War without ever losing sight of the biggest question of all: can America continue to shape world affairs or is it now facing long-term decline?

“With great power comes great responsibility, but as Michael Cox deftly shows in this persuasive account of US foreign policy since the end of the Cold War, only when a country’s leaders can turn that power into judicious policy. In an era when American power has outstripped national will, Cox’s balanced assessment of the foreign policy missteps, miscalculations, and lapses it has wrought makes for essential reading. Scholars and students alike will benefit from these penetrating essays on what ails the American colossus.” Peter Trubowitz, Phelan US Centre at LSE

“Michael Cox has long been one of the most intelligent and original scholars of America’s grand career on the modern world stage. In this engaging collection of essays, Cox turns his attention to United States foreign policy during the post-Cold War unipolar years, offering a compelling portrait of an unsettled superpower that is at once an empire and a liberal democracy.” G. John Ikenberry, Princeton University

“Represents the decades that Michael Cox has spent thinking about the US and its foreign policies. It is shrewd, insightful and wise on the politics of a global power that claims not to be an empire. A book to be enjoyed.” Caroline Kennedy-Pipe, Loughborough University

“Few observers of America’s ‘unipolar moment’ have a perspective born of both closeness to the debates and detachment from Washington’s machinations as Michael Cox. And even fewer afford the United States such fairness of judgement, unincumbered by ideology or vested interest. Cox sheds crucial light on the question of whether the United States can continue to play the role it has for the last thirty years, and what the alternatives are for the rest of us.” Nicholas Kitchen, University of Surrey

“A sweeping, illuminating journey through American grand strategy from the end of the Cold War to the dawn of Biden’s presidency. Cox is an astute guide who offers a readable, thoughtful exploration of how the American Empire has evolved to reshape the world.” Brian Klaas, University College London

“For many years Michael Cox has been writing articles and books that compel us to reassess fundamental assumptions. Here again, in this book of incisive, powerful essays, he impels readers to rethink America’s actions and behaviour in the international arena.” Melvyn P. Leffler, University of Virginia

“Mick Cox’s collected essays provide a bounty of smart insights for anyone trying to make sense of the twists and turns in American foreign policy over the past thirty years.” John J. Mearsheimer, University of Chicago

“A fascinating critique of American foreign policy since the end of the Cold War by one of Britain’s leading analysts.” Joseph Nye, author of Do Morals Matter? Presidents and Foreign Policy from FDR to Trump

“In this empirically rich revisionist study, Michael Cox explains why a self-confident America of the late 20th century has arrived at the critical turning point it finds itself at today.” Brian Schmidt, Carleton University

Michael Cox is Emeritus Professor of International Relations at the London School of Economics (LSE) and Founding Director of LSE IDEAS. He is an associate Fellow in the US and Americas Programme at Chatham House where he established their original United States Discussion Group, is a member of the Scholarly Advisory Board of the Gilder Lehrman Institute for American History in New York, and writes regularly for the US-based H-Diplo network. His most recent books include The Post-Cold War World (2018), a new l edition of J. M. Keynes’s The Economic Consequences of the Peace (2019), and a new volume of E.H. Carr’s Nationalism and After (2021)..
PrevNext
We use cookies on our website to give you the most relevant experience by remembering your preferences and repeat visits. By clicking “Accept”, you consent to the use of ALL the cookies.
Cookie settingsACCEPT
Manage consent